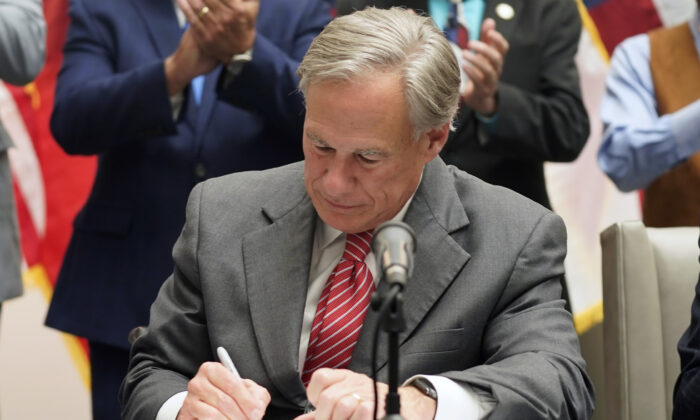 Texas Gov. Greg Abbott signed a bill passed by the GOP-led legislature that is designed to stop social media companies from censoring users based on their political statements or viewpoints.

The measure was introduced earlier this year but was delayed when dozens of Democrat state lawmakers left the state to deny Republicans quorum and block the passage of a voting overhaul bill that Abbott, a Republican, signed several days ago.

House Bill 20, the social media bill, was signed by Abbot on Thursday. It prevents companies from suspending users based on their politics and allows Texas residents to file lawsuits to reinstate accounts that are deemed to have been unfairly targeted and removed. Namely, the legislation targeted platforms that have at least 50 million users, which would include Facebook, Twitter, and YouTube, among others.

“There is a dangerous movement by some social media companies to silence conservative ideas and values,” said Gov. Abbott in a Facebook live video. “This is wrong and we will not allow it in Texas.”

Other than allowing Texans to file lawsuits, the law also allows the Texas Attorney General’s office to take action.

“We will always defend the freedom of speech in Texas, which is why I am proud to sign House Bill 20 into law to protect first amendment rights in the Lone Star State,” Abbott also said, echoing arguments that social media platforms serve as modern public forums that should allow people to engage in debate.

Abbott, however, said that within social media firms, there is a “dangerous” trend that he said is designed to “silence conservative viewpoints and ideas.”

Scholar and anti-critical race theory activist Christopher Rufo this week said he obtained information that Google has internally launched an initiative to portray the United States as a “system of white supremacy.” In one slide that was obtained via an alleged whistleblower, it shows a “white supremacy pyramid” that includes commentator Ben Shapiro and former President Donald Trump and suggests it leads to mass murder and included photos of mass shooters Anders Breivik and Brenton Tarrant.

Florida earlier this year passed a similar bill, but it has faced legal challenges and hurdles to enforcement. The measure required firms to be open about their content-moderation policies and tell users about policy changes.

A judge blocked enforcement of key provisions in the Florida law several months ago, claiming that it likely violated the First Amendment and violated federal laws.

Since the 2020 election, some conservatives have argued for the repeal of Section 230 of the 1996 Communications Decency Act, which serves as a liability shield for companies against harmful content that a user may post. Some have argued that tech companies have utilized the rule to exert too much power over what information people can consume.

Jack Phillips
Senior Reporter
Jack Phillips is a reporter at The Epoch Times based in New York.
SOURCE : https://www.theepochtimes.com/mkt_breakingnews/texas-governor-signs-law-allowing-users-to-sue-social-media-companies-over-suspensions_3991673.html?utm_source=newsnoe&utm_medium=email2&utm_campaign=breaking-2021-09-10-2&mktids=02a67643a0c25661d6497000a2d4ae3a&est=xZIz%2FOycPwkQItGh22K6eN6ioIVVOgtgbHL%2B9ZDgezJKZR9iIyq8DJQGMm3p5fnXpoeL